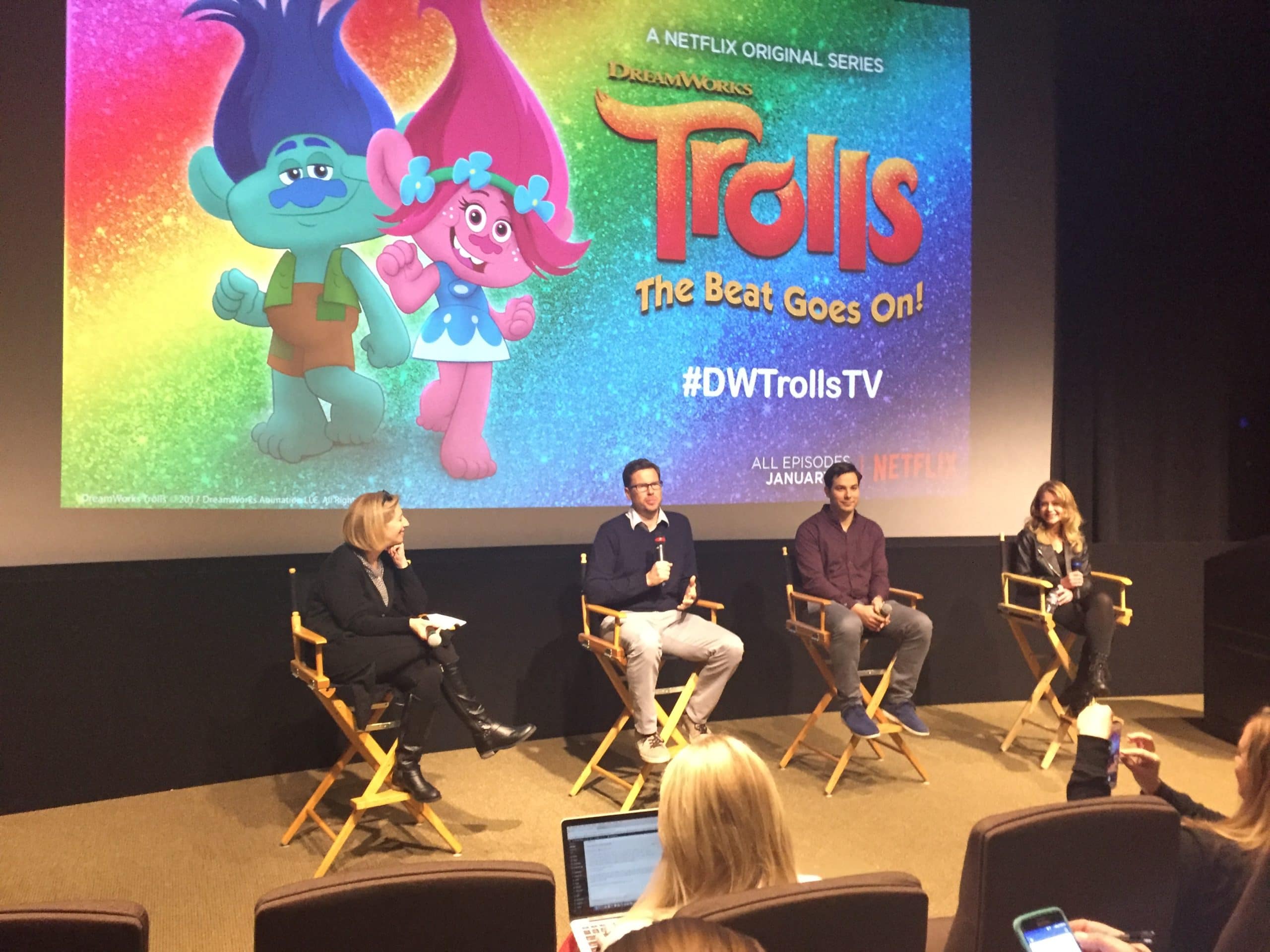 It has just been over a week since the release of Dreamworks Animation Studios, Netflix Original Series Trolls: The Beat Goes On. Personally, I LOVE IT! After watching the entire season in just under a week, twice (I have kids and everything has to replay) it has provided some very special moments with the kids. The story, the songs, the animation has all resonated so well with my family it has become one of our go to shows to put on first thing in the morning.

One of my most memorable experiences during my trip to Dreamworks Animation Studios was our time in the theater.  Almost everything I was a part of was a first for me and with all of the activities this wonderful organization had us part of I was there just taking it all in with amazement and participating as often as I could.

Meeting some of the team leads behind this incredible show was very surreal and it was inspiring to hear all the wonderful things they had to say in relation to its overall process. Also, having the opportunity to see other bloggers who were way more experienced than me asking all kinds of cool questions only added to the experience for the better. It was such a pleasure to meet so many wonderful people from around the country.

During out time in the theater we had sometime to sit down with Executive Producer Matt Beans and the voices of Branch and Poppy – Skylar Astin and Amanda Leighton. Now with the movie roles of Branch and Poppy being voiced by Justin Timberlake and Anna Kendrick, you would think they would have some big shoes to fill, but after watching the Netflix Original Series they took their roles and ran with it…They made it their own and that is one of the things that I really think separates the show from the movie. Very well done.

While sitting with the cast here are some of the questions that were asked and the answers that were given. It really gave me a better understanding on the making of a show and a much larger appreciation for its entire process — it also made want to start acting because it sounded SUPER FUN!

Matt Beans: Matt, can you give us an overview of Trolls: The Beat Goes On?

“Yea, obviously it picks up where the movie left off which leaves us with a lot of territory to explore, you will probably remember from the movie only the first 20 minutes took place in Troll Village and we deep dive right into the series exploring what goes on in that world. Mostly surrounding what Poppy has to do as Queen, which usually has to do with making sure the status of fun within Troll Village is being kept to a premium, while caring about all of her friends and their needs an Branch being the misfit outsider who really helps and is a super useful narrative tool to have a character hidden underground for 10 years and really has no idea what is going on, so he can ask those questions that the audience is asking – What is this super crazy thing? and we get to define it.  It is really all about the Trolls and what is happening in Troll Village and what their day to day life is like.”

Skylar and Amanda, who do you play? How does it fit into the rest of the Trolls?

Amanda: “I play Poppy, Queen Poppy and she is the new queen who is figuring out how to make the village happy and is someone who is super optimistic, is fun and just cares about her friends.”
Skylar: “I play Branch who is kind of the curmudgeon of the group and is someone who does not always go along with the journey and always learns something positive along the way, which I always appreciate. I think that beneath all of that hard work and no play he is a character who has a heart of gold.”

So Amanda playing queen. Was there anything you had to do to prepare for the role?

“It is funny because when I first auditioned for the role Trolls wasn’t out yet and with voice over auditions you are presented with maybe one scene, you get a little picture of a character and I got a little bit of the voice of Anna from the film, so everything was like – OK, I have a voice I have a picture and I have a script. It was kind of just like filling in the blanks and trusting yourself trying to see who the character is and trying to stay true to who that character is.”

Skylar, with your character living in a bunker – where did you pull from to sort of bring the role of Branch to life?

“Well Matt really helped me because I asked, what kind of voice do you want? he said – yours, just do you and lets start there. That is what I did. It turns our I am a super negative person. We really found our groove”

Matt, how do you feel the music is interval to the series? Has is presented any challenges?

“Yes, yes. Our songs are incorporated into the story so they are not really exposition devices, they are not telling you plot or whats going to come next. It is mostly like these characters reach a certain moment when they are feeling something and they have to express it! How they usually express it is through song is it very easy for the trolls. Gradually over time, I think the songs have created a strong identity for the show.”

This series starts off where the first movie ended. Is the end goal to try and line it up with the second upcoming trolls movie?

“Well, we are not thinking so much in terms of trying to make our story line up with the second film as a seamless hand off. We definitely respect what the feature team is doing and we communicate with them regularly to make sure with what we are doing fits in the same world. But yes, it is all part of a continual story these are the same characters that you see in the feature, so we are not going to have Poppy behave in a way that she wouldn’t in their way.

Having a Q&A with 3 individuals was quite extensive but very eye opening to get the perspective of  those in different roles and responsibilities. The chemistry between everyone could not have been more perfect. They all had such a wonderful sense of humor and really made the characters so likable.

Again, Trolls: The Beat Goes On is now streaming live on Netflix and I encourage you to check it out…. You and your family will LOVE IT!