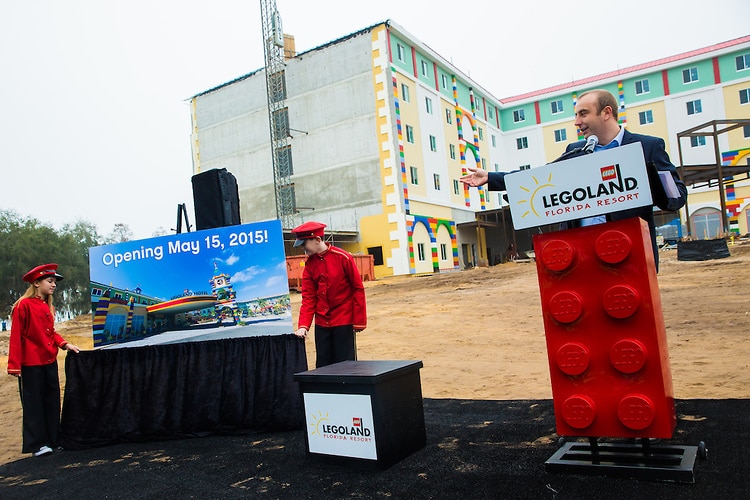 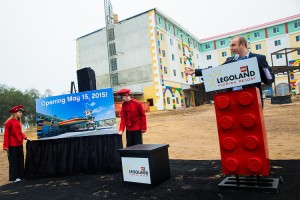 LEGOLAND® Hotel at LEGOLAND® Florida Resort is officially opening May 15, 2015! The announcement came today from General Manager of LEGOLAND Hotel, Kevin Carr, during a press event at the Hotel site, located just steps away from the theme park entrance.  LEGOLAND Florida Resort General Manager Adrian Jones also announced Heartlake City, the newest land based on the popular LEGO® Friends line of toys, is opening this summer.

Both additions are expected to boost the local economy. Carr expects to hire 150 Model Citizens (employees) to support the Hotel. “LEGOLAND Hotel offers a unique experience unlike any other in Florida,” said Carr. “Imagine how excited children will be to wake up in a giant toy box full of LEGO bricks and to be the first to enter the theme park each day.” Jones also announced a Master Model Builder Workshop being offered exclusively to Hotel guests. “LEGOLAND Hotel is an extension of the theme park experience and the stars of our Park are our Master Model Builders,” said Jones. “We’re moving the Model Shop into our Hotel and guests will be able to learn and build with our Model Builders daily in the Master Model Builder Workshop.”

Today’s event at the Resort included a hard hat tour with a behind-the-scenes look at the Hotel. Media and VIP guests were taken to one of the fifth floor suites to experience the spectacular views of Lake Eloise, the theme park with its 50 rides, shows and attractions, and the site of the future expansion, Heartlake City.

“When it opens in summer of 2015, Heartlake City will be a colorful and vibrant new land offering adventures for all ages,” said Jones. “The centerpieces will include a fantastic horse-themed disc coaster called Mia’s Riding Adventure and an interactive show, ‘Friends to the Rescue’ as well as new shops inside Heartlake Mall. Between our constant expansion, the new LEGOLAND Hotel opening in May and the Water Park re-opening in March, LEGOLAND Florida Resort is definitely a multi-day attraction.”