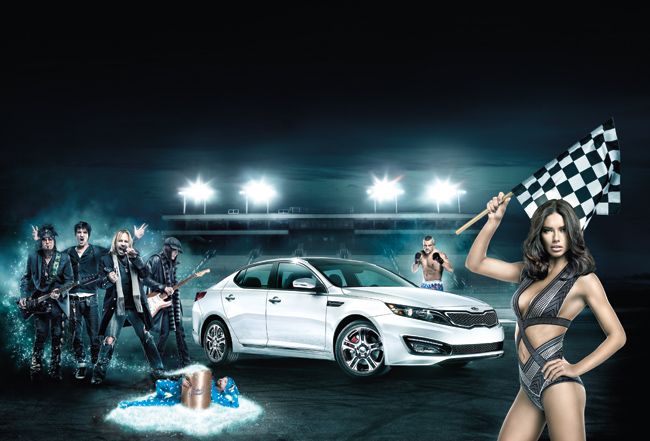 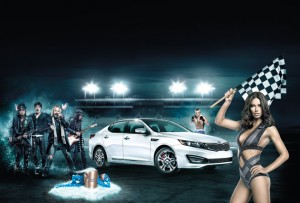 I love watching sports (and when I was younger I loved playing sports)… but when it comes to the big game – I really watch for the commercials – the ones that make me laugh or bring a tear to my eye (yah there have been some sappy ones) but those bud frogs will still get me to chuckle a bit.  This year might be a bit different cause my Team is in it to WIN IT! Go New York Giants!

Now I loved Kia’s ad last year featuring the toys (yah you know my history with Muno) so I’m really hoping this year can top it!

This year Kia will be featuring their “Drive the Dream” commercial and I’m looking forward to seeing the traction it gets. Over the years their cars have really started to leave more of an imprint and I think this year is no exception to that rule. Kia’s actually so excited about the new release of their Optima Limited inspired commercial (airing during the 4th Quarter) that they’re hosting a Twitter Party!

The party will be held this coming Thursday, February 2, 2012 from 7 to 8pm EST. You wouldn’t necessarily think there would be this much excitement over a commercial but when you combine the Big Game, Mötley Crüe, Mr. Sandman, and the all new Optima Limited you’re at a whole new level! Plus, we’ll be hanging out with some cool guys including Josh of @dadstreet , Drew of @BenSpark, Daniel of @M_oa_SD, and Ryan of @daddyDigest.

If you’d like to participate please make sure that you follow those guys as well as myself @DadStreet, @Kia,  and use the hashtag #KiaSandman. See you at the Party on Thursday!

Disclosure: I have accepted a prepaid gift card and potentially other compensation from Kia Motors America, Inc. in exchange for my services to promote Kia’s Twitter Party being held between 7:00 p.m.-8:00 p.m. ET on February 2, 2012.

IRVINE, Calif., January 25, 2012 – Dreams have been a topic of speculation and interest throughout history, and Kia Motors America (KMA) is tapping into the idea of dreams revealing true desires in a new 60-second commercial set to air during the fourth quarter of Super Bowl XLVI. In the spot, titled “Drive the Dream,” the new 2012 Optima Limited races through a Gen X couple’s wildest thoughts as they sleep, including: Victoria’s Secret® Angel Adriana Lima waving the checkered flag at a speedway; an in-your-face Mötley Crüe concert; mixed martial arts legend Chuck Liddell battling in the ring; a heroine and hunk on horseback in a romance novel setting; champion bull rider Judd Leffew taming a bucking rhinoceros; and a fairy tale ending.

Kia returns to the big game for the third straight year with a fully integrated marketing campaign incorporating TV, cinema, digital, print, social media and in-dealership components. In a Super Bowl advertising first, the complete “Drive the Dream” ad will premiere on February 2 on more than 18,000 movie screens nationwide in National CineMedia’s FirstLook pre-show program before airing in the game. Kia also will run 15-second teaser ads featuring Adriana Lima on TV and in cinema beginning on January 27, while also leveraging the Twitter and Facebook channels of the spot’s celebrity cast. A special expanded version of the ad will be available at YouTube.com/Kia beginning on February 2.

“With more than 100 million people watching the Super Bowl broadcast and millions more viewing content online around the world, Kia will once again deliver a memorable, one-of-a-kind campaign that entertains people before, during and after the game and leaves them wanting to see the Optima Limited fantasy again and again,” said Michael Sprague, vice president, marketing & communications, KMA. “We selected an eclectic group of celebrities and personalities for ‘Drive the Dream’ to enable us to tap into a diverse body of fan bases and leverage each talent’s expansive social media footprint.”

Created by David&Goliath, “Drive the Dream” opens with the familiar notes of The Chordettes’ “Mr. Sandman” as a real-life Mr. Sandman enters the bedroom of an unsuspecting young couple who are asleep. After being sprinkled with “Sweet Dreams” dust, the woman smiles and envisions herself on a horse with a romance novel-like hunk in a beautiful green meadow. Meanwhile, Mr. Sandman accidentally stumbles and spills his entire night’s dust supply on the man, launching an extreme dream sequence that begins with the roaring guitars of Mötley Crüe’s “Kickstart My Heart” and Adriana Lima waving a checkered flag as he blasts around a race track at night in a Snow White Pearl Optima Limited with thousands of bikini-clad fans cheering him on from the stands.

As he circles the track with Lima looking on adoringly, the dreaming driver receives nods of approval from the band as bursts of flames and fireworks surround their stage as well as Chuck Liddell, champion bull rider Judd Leffew, and a pair of lumberjacks sawing a massive submarine sandwich.

“Mötley Crüe had a blast doing the Kia commercial,” said bassist Nikki Sixx. “A hot model, a fast car, a pro fighter, pyrotechnics and rock n’ roll…What’s not to love?”

Much to the disbelief of Lima and drummer Tommy Lee, the high-octane dream turns into a fairy tale when the husband makes a conscious decision to drive the Optima Limited off the race track and into his wife’s fantasy to win her back from Prince Charming.

“After working with Kia for the Super Bowl last year I was drawn to work with the fast-growing brand again by the idea of exploring people’s ultimate fantasies in a fun and lighthearted way, and I am certain we have created a spot people will be talking about after the game,” said director, Noam Murro.

As part of the “Drive the Dream” campaign, beginning on Thursday, February 2 consumers can download a $25 pre-paid test drive voucher (*1) at Kia.com that is redeemable after eligible consumers visit a Kia dealership and complete a test drive of any Optima model.

Kia Motors is the one of the world’s fastest moving global automotive brands; from 2009-2011 Kia launched more new vehicles in the U.S. than any other automaker, and under the guidance of chief design officer Peter Schreyer earned a reputation as an industry leader in automotive styling. Kia Motors America’s full line of fuel-efficient and fun-to-drive cars and CUVs has earned critical acclaim and dramatically increased consumer awareness, perception and consideration for the brand. In 2011, KMA recorded its 17th consecutive year of market share growth, thanks in part to the largest increase of any major brand in perceived quality (*3) and the industry’s highest brand loyalty ranking (*4). Kia’s U.S.-based manufacturing facility in West Point, Georgia – KMMG – is responsible for the creation of more than 10,000 plant and supplier jobs and builds the company’s two best-selling vehicles in the U.S. – the Sorento CUV and Optima midsize sedan (*5). Kia’s value and technology-laden 2012 model year lineup also includes the Sportage compact CUV, Soul urban passenger vehicle, Optima Hybrid, Forte compact sedan, Forte 5-door compact hatchback, Forte Koup two-door coupe, all-new Rio and Rio 5-door sub-compacts and Sedona minivan.

Kia Motors America is the marketing and distribution arm of Kia Motors Corporation based in Seoul, South Korea. KMA offers a complete line of vehicles through more than 755 dealers throughout the United States and serves as the “Official Automotive Partner of the NBA.” In 2011, KMA recorded its best-ever annual sales total and became one of the fastest growing car companies in the U.S. Kia is poised to continue its momentum and will continue to build the brand through design innovation, quality, value, advanced safety features and new technologies.

Information about Kia Motors America and its full vehicle line-up is available at its website – www.kia.com. For media information, including photography, visit www.kiamedia.com.