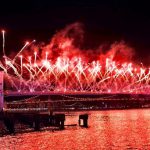 The largest display of fourth of July fireworks takes place here in New York City and is hosted by Macy’s Department Store. Macy’s Fourth of July Fireworks celebrates its 40th anniversary this year!  This year the fireworks once again take place in the East River that giving an amazing view by the South Street Seaport.

If you want to celebrate the Fourth of July with the South Street Seaport Museum you’ll get access to an exclusive seating area on Pier 16. On Monday, July 4, 2016 you’ll have ticketed access to the pier starting at 5pm. The fireworks on the East River start at 9:25pm. Bring a blanket or chair and enjoy a night at Pier 16 with family and friends, while supporting the South Street Seaport Museum!

Bonus my link will give you a $10 off discount on tickets! 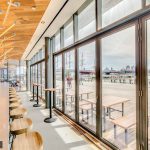 Now if you’re a bit more into the party mode Industry Kitchen, is one of South Street Seaport’s waterfront great new restaurants & bars, located under the FDR. It has a great viewing area for the fireworks and offers a couple of different packages to enjoy an premium open bar and buffet. 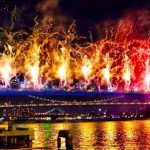 Now if you’re wondering what to do all weekend or day leading up to Macy’s Fireworks… well the great folks over at Howard Hughes Corporation are having a block party called the Festival of Independence at the seaport. Presented in partnership with Noisey, the music and culture channel of VICE, there will be two stages one for the adults and one with more family friendly entertainment.

Sunday, July 3rd on the Noisey Stage on Fulton Street from 1pm to 9pm:

Monday, July 4th on the Noisey Stage on Fulton Street from 1pm to 9pm:

Monday, July 4th on the Peck Slip Stage from 1pm to 8pm:
Live music performances with family entertainment during the afternoon leading into cool indie rock in the evening –

Free and open to the public. The festival of Independence is two days of music, across two stages, with a line-up ranging from rock to soul to hip-hop that ends with the Macy’s 4th of July fireworks show. #seaportdistrictnyc #noisey #macysfireworks