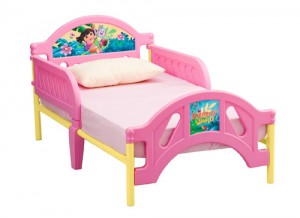 Dora is 10 years old… wow Happy Birthday Dora – I’ll totally admit it when I first heard of this cartoon ten years ago I never thought 10 years later I’d be watching it with my son. Yet here I am watching Dora the Explorer: Dora’s Slumber Party [Link] a compilation DVD containing six of Dora’s bedtime adventures. Sure my child’s first complex word was backpack between that and map its given him hours of enjoyment – I really also hope its teaching him some basics of a second language because I certainly know I’m barely ok with English.  The DVD of Dora’s slumber party is cute and is pretty good tv for before bed as it contains the theme its time for sweet dreams.

With that said Dora has come into my house while we are thinking about moving Marc into a toddler bed, we’ve been thinking about it for a while since he climbed out of the crib. After everyone (and I mean everyone) said it was crib tent time and not toddler bed thats the route we took. He goes to bed in his crib but wakes up freaks out and wants out to come sleep in between me and mom (ahhhh).  I figure this giveaway might help a toddler sleep in a toddler bed because I feel like all kids start to come into shows at a similar point, so if we’re thinking about it maybe you are too. 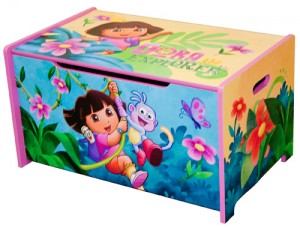 Can you believe Dora is now 10 years old?! Dora and friends have been teaching kids Spanish, exploring their surroundings, sharing and helping kids learn through this unique one of a kind show. In partnership with Delta Children’s Products – we are celebrating Dora! Here’s your chance to get a hold of the exclusive Dora 10th Anniversary Room Set for your toddler.

The room set includes a toddler bed, toy box and a 10-piece room décor in a box. This Dora room set will inspire your toddler to keep exploring and learning – just like Dora.

Total retail value: $160.00. All Dora 10th Anniversary products can be purchased at Toys “R” Us, Babies “R” Us, Walmart, and Kmart

We’re giving away 1 toddler bedroom set (with DVD) and two runners up will get a DVD.

About the DVD here are the information about the 6 episodes and I would highly recommend it for any Dora fan! It came out Tuesday! I received a screener copy to watch, just in case you’re wondering.

Dora and her friends have lost their most precious toys and will do anything to get them back.  The friends discover that toys must go to the Lost City when they are lost, but the city is very hard to find. Dora and Boots embark on an Indiana Jones-like adventure as they race through the Number Pyramid and take a quick shortcut through the Jumbled Jungle.  If they find the Lost City, Dora will get back her lost teddy bear, and all her friends will find their favorite lost toys.

As Dora and Boots get ready to make a wish on the first star that appears in the sky, the star falls.  It’s now up to Dora and Boots to bring Little Star back home to the Moon, so everyone can make their wish. They will have to take Little Star on a long journey over the Troll Bridge, and past Tico’s Tree to help get the star all the way back into the sky.

Dora Had a Little Lamb

Mary had a Little Lamb, but now Little Lamb is lost.  Dora and Boots jump into a big book of Nursery Rhymes to bring Little Lamb back to her best friend, Mary.  Along the way to Mary’s House, Dora, Boots and Little Lamb pick pickled peppers with Peter Piper; help the Itsy Bitsy Spider climb up the Water Spout; ride a cow over the Moon; put Humpty Dumpty back together again; and even catch a ride in a motorized bath tub. 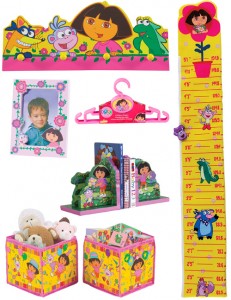 You get 1 extra entry for tweeting about this contest (you can do this daily). Must contain the following information:

Example: I want to win the #Dora Toddler Bedroom from @DeltaChildren & @dadarocks – http://bit.ly/9IPyz7

You get 1 extra entry for becoming a Fan on facebook – facebook.com/dadarocks you must comment that you’re a fan

You get 1 extra entry for becoming a Fan on facebook of Delta Children– facebook.com/deltababy you must comment that you’re a fan

Disclaimer: Delta Children is providing the prize for the raffle.